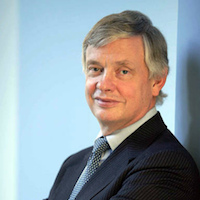 David Pascal, BSc (Hons); MBA (Dist) CBE served as an Operational Managing Director of Terra Firma Capital Partners Limited. (Founded by Guy Hands) for nine years. David joined Nomura’s Principal Finance Group in 2000 which spun off to become Terra Firma in 2002. David served as the Chief Executive Officer of Terra Firma GmbH, the Frankfurt office and was responsible for its acquisition of 220,000 flats in Germany by acquiring Deutsche Bath’s and Viterra’s housing assets to form Deutsche Annington as well as acquiring Tank n Rst from the German Government.

Earlier in his career, David spent 25 years at British Petroleum where he held various senior positions in the UK, Germany and France in technical, finance and commercial roles. He was seconded by BP in 1982 to the Central Policy Review Staff in the UK Cabinet Office and then to the No, 10 Policy Unit where David advised the Prime Minister, Lady Thatcher on a range of policy areas.

Returning to BP, David was put In charge of BP’s Change Management Programme. He was appointed by the UK Government as Chairman of the National Curricullum Council in 1990 for which he received a CBE. David was also a Director of MAI and Rocco Forte Hotels before joining Terra Firma. Fallowing retirement in 2009, David has held a number of Chairmanships and Directorships including Chairman of Bio Products Laboratory Ltd and non Executive Director of Royal Free Hospital rowel as Director of AI Airports International Ltd. David is a long standing Chairman of School Governors and today is a Trustee of London Pathway as well as chairing Mind in Haringey, a mental health charity.

David was a long standing member of Enercoutim’s Advisory Board before becoming Chairman of the Holding Company in 2016. David graduated from the University of Birmirgham with a B,Sc., first class In 1970 and In 1979, completed his M.B.A. with distinction at INSEAD In Fontainebleau, France.